Life in the green fast lane

A few more details about the Model 3 have come in after the test rides at the launch event meriting a third post in less than 24 hours.

The new roof is a very large pane of glass unlike most cars.  The hood is lower than on most cars and the panoramic glass extends from the hood all the way to the rear.  Using glass the rear passengers have more headroom and also a perception of more physical space.

The Model S has a similar style of roof with the Panoroof / sunroof option.  Tesla has engineered the glass to resist excessive heat or glare, and no complaints exist from owners in places like the Arizona desert.  Only in extremely cold climates is there a small disadvantage to a glass roof as the roof does not insulate the passengers quite as well from the cold as a some conventional roofs requiring a little more energy to heat the car.  This lack of insulation would only affects you if you are trying to sleep in the car and not while driving.

Update:  the roof will have three options:  the all glass roof, a retractable glass sunroof or a metal roof.

The Model 3 is not a hatchback like the Model S but has a conventional trunk as you can see from the photo.  The front hood also opens up for more storage.  Tesla used to call this space a “frunk” but recently I have heard the term “front trunk” used more frequently.

Elon clearly stated that the Model 3 can fit a 7′ surfboard in the interior, which is an impressive specification.  Tesla has clearly listened to the customer base who want practical cars.  I am looking forward to seeing a demonstration of the surfboard being loaded into the Model 3.

Model 3 Storage Space With a Trunk in the Back and in the Front.

The Model 3 prototype also has a center console for storing items and including cupholders.  I think Tesla finally got the message that the majority of drivers want this storage space and hopefully is now a standard on all cars going forward.

I like the idea of a unified place to get all the information.  I also think repair costs are reduced having the touchscreen not be installed into the dashboard.

I am impressed with the Model 3.  I think it looks great, the minimum technical specs are very reasonable, and the storage space seems very good.  Tesla clearly has listened to their customers post Model X launch.  My only concern for Tesla is that the Model X now seems a little lost in the lineup.  The only obvious market is a wealthy family with young children that generally live a city based lifestyle that is not hampered by the Model X carrying capabilities.

For the first the in almost two years, my frunk became stuck.  I have been in the habit of putting a cooler in the frunk “just in case” along with a number of other items since I really don’t need the space.  I had opened the frunk but did not adjust the cooler back enough and the frunk latched but did not really completely close.  So when the frunk was closed it had about a 1” gap.  I tried releasing the latch with the key fob and also with the button on the touch screen to no success.   I decided to call Tesla Roadside Assistance at (877) 798-3752.

Interestingly enough the person on the phone did not refer to the frunk as the “frunk” but as the hood.  She walked me through the relatively painless procedure to release the frunk latch.

1.  In the car under the dash on the passenger side is a lever that controls the wire to the frunk latch.  This lever is on the far right hand side near the passenger door.  It is very hard to see with a black interior but quite easy to feel as it is on the far right hand side.  By pulling on this lever about twenty times, you will release the wire that holds the frunk.

2.  In the 1” gap between the hood and the car itself, you will need to find a plastic button with your fingers just to the left of the center.  In the photo you can see this small black button just to the left of the Tesla logo.  Pushing down on this button will release the hood.  This process is a bit awkward.  You will need to feel around in the space with no visual clue and find the button, which feels very plasticy.  The button is not particularly hard to press but still has some resistance.

The entire process including the call took less than ten minutes and would take even less on a second attempt.  Hopefully I will be more careful with the placement of the cooler and not need to repeat this procedure. 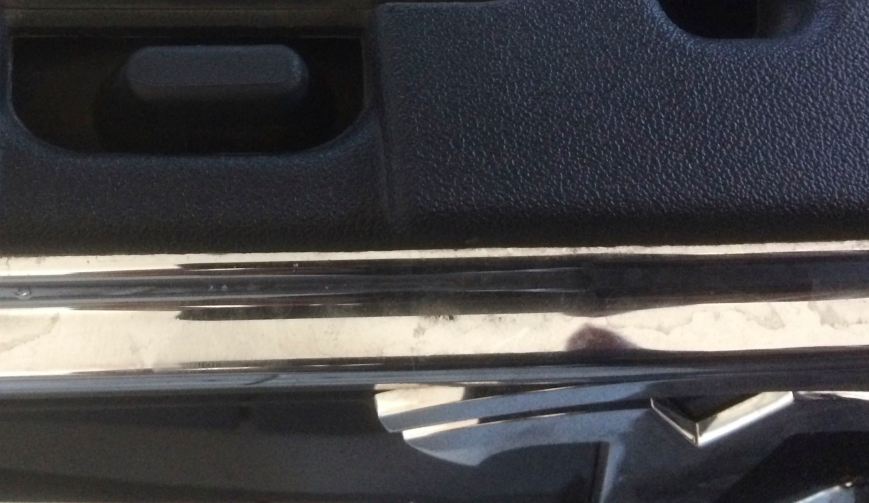 There is a rumor on the forums that the newest cars have a slightly different latching mechanism but still requires the same two handed procedure to close the frunk.

When I took the factory tour in early 2013, the guide did not let us go near the area where they build the battery but he explicitly told us:

The battery weighs the same for 60kWh and 85kWh.  Dead cells are put into the 60kWh battery in order to keep the weight the same.  This odd feature is to avoid performing two sets of crash tests.

They also listed only one weight in any of their documentation in the past.

Recently folks have been commenting on the fact that the 60 battery version weighs less.  Now with the 5.9 version of the manual, Tesla lists different weights for the 60 and the 85.

The curb weight is the weight of the car parked with standard equipment and without any occupants or luggage.  The difference in the weight of the 60 vs the 85 is 223 pounds or 101 kilograms.  Both bare bones versions have the same options except the 85 is “supercharger enabled” but this is simply a software switch that 60 owners can purchase after the fact.

The gross vehicle weight rating is 5,710 lbs or 2,590 kg for the Model S.  This second measure is how much weight is safe for travel including any additional car options, passengers and all cargo.  For a 85 battery, you can carry passengers and cargo up to 1,080 pounds; truck manufacturers use the term payload for this difference.  This number is actually smaller then I would expect.  I can easily imagine a scenario in the United States where four people were traveling and each weighted 200 pounds and were also carrying some particularly heavy items in the trunk and frunk. They could exceed the Gross Vehicle Weight Rating.  I don’t think this difference between Curb Weight and Gross Vehicle Weight is much different than for ICE cars but finding these specification is not that easy.  The payload for a Dodge Ram 1500 Express is 1,719 pounds.

I was surprised to discover that the charge port locks on the Model S.  One afternoon I returned home and popped the trunk and the charge port.  I proceeded to take a series of items out of the car and the trunk including groceries.

Upon returning to the car, I tried to plug in the charger but had no success.  I also realized that the light directly around the charger was not on.  I was a bit befuddled.  I tried to plug the charger in anyways and it would not connect.  I did not remember this happening before with the Model S or the Roadster.

I went back into the house to get the key fob.  Using the key fob, I found I could get the exterior red tail lights to illuminate but not the charger itself. 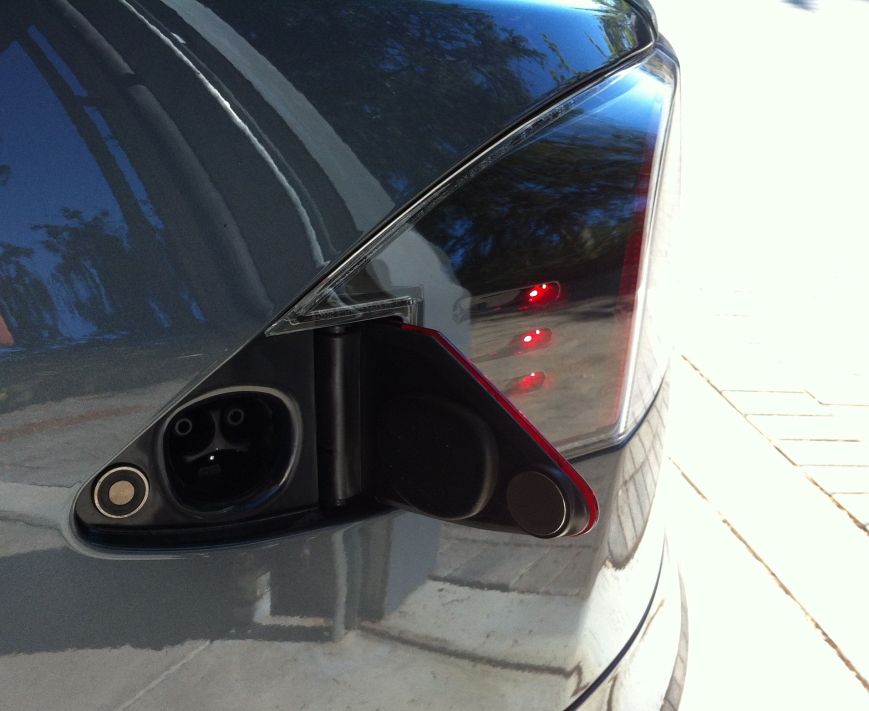 Instead of experimenting any further I decided to call the Tesla number thinking “why not?”.  The friendly person on the line said I may have to unlock the charger from the car.  I easily found this button on the charging menu, and the charger light quickly went on along with an audible click. 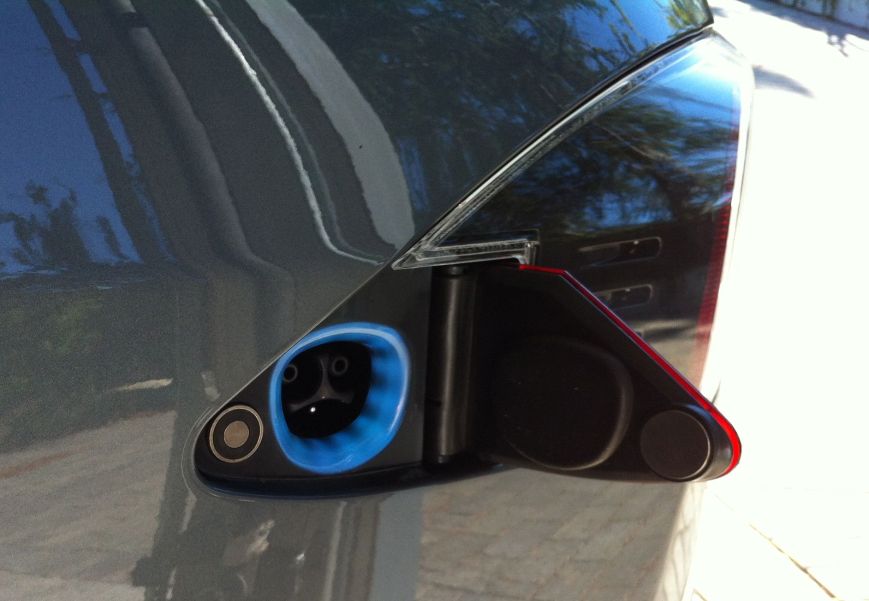 I was a bit surprised at a two things.

The car does tell you when you are driving that the charger door is open. I actually saw a family driving down the freeway here with their charger door open a couple of months ago.  I wonder how they ignored that message.

All photos and text are copyrighted by Tesla Owner. You can use any photos for personal or commercial use if you credit this blog and provide a link.