Life in the green fast lane

I generally don’t cover Tesla news as the mainstream media and the two forums cover them well.  Recently there have been three events that I thought were worth mentioning on this blog.

First, two teams of people managed to cross the country in Tesla’s using the supercharger network.  The first was a father and daughter team.  The second was an official Tesla team earning a Guinness world record for “lowest charge time for an electric vehicle traveling across the country”.  Seems like somewhat an odd world record but they basically made it in a little over three days in true winter weather.

Both of these exercises would not be particularly fun or something a typical driver would want to do.  Most people would want to stop and enjoy the scenery and sights and not simply drive from point A to point B.  But both of these trips showed that enjoyable road trips throughout the world will soon be possible as more and more superchargers are installed.

One notable feature I noticed in the coverage of the official Tesla cross country drive was the newer firmware has an option to show the percentage of battery remaining.  I am excited about this small feature as I think the percentage is much more intuitive than the current reading of rated range miles.

The third event was a Q&A session in Norway with Elon Musk and JB Straubel in Oslo last week.  You can watch the long video.  I found the following points the most interesting.

The upcoming version 6 software will have some new features and improvements on existing features.

Tesla is working on an active hill hold feature.  Today the Model S on hills reminds me of stick shift cars where if you were not good with the clutch, the car would roll back.  With the Model S, you have to use your brake on hills in order to not roll back.  On steep hills, I often feel like I need to very quickly shift from the brake pad to the accelerator.  I have experimented with trying to use the existing creep feature on steep hills but it did not solve the problem in a significant way.  In extreme situations, I have used both feet to release the brake instantaneously while pressing the accelerator.

Various questions from the audience brought up physical aspects of the car.

A discussion occurred on how green the Model S is.  Tesla has done an internal energy study on the car production and will release a white paper on this soon.  JB said that the energy payback occurs in less than 10,000 miles of driving.  Elon also said the car with a battery replacement should easily last twenty years.

Most of the superchargers this year will be charging at 135kW — another improvement of charging times for most Model S owners.

Tesla does not record car speed or location data.  During an emergency, they can detect this information.  They do monitor the battery regularly.

Various discussion points about the Model X and its gull wing doors.  A Norwegian driver was concerned about transporting long skis.  Elon said there is potentially a place for a ski box in the triangular place between the doors or a location under the seats.  I doubt the Model X will be able to transport a paddleboard or a kayak.  Elon also said if you can physically fit between the Model X and the car, the doors will have enough side clearance to open.

I spent a month in Madrid and left my Model S plugged into the garage at a 50% charge rate.

As many people know, European infrastructure is completely different than most of the US.  I was physically only in a car two times during my one month stay – to and from the airport.  Since the weather in September was lovely, I mostly walked.  I was living between Museo Nacional del Prado and El Retiro, which is my favorite city park in the world.  I took the metro a few times but not enough to exhaust my 10 ticket pass.  I also took the train to other sites in the area of Madrid. 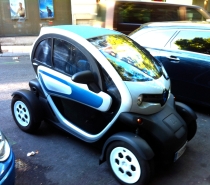 During my stay, Tesla began deliveries in Europe.  I never did see a Tesla but I did see one electric bike and an electric car, a Renault Twizzy.

I struggle to see a large vehicle like the Model S working very well in a true city environment.   I think many parking spaces in these older cities are not going to be very large so one would struggle to park the Model S.  Also in an apartment complex, I imagine it will not be fast to get a good electric outlet installed.  Citizens in Madrid have repeatedly told me that they are very resistant to change.

Secondly in some cities in Europe, I am not sure I would own a car depending upon the location.  Madrid has a very efficient Metro system where often the next train is only 5 or 10 minutes away.  Also unlike San Francisco, taxis are constantly roaming the streets and are not particularly expensive for the occasions when you need to carry bulky items.  The country has a nice train system for weekend excursions, and you can always rent a car. 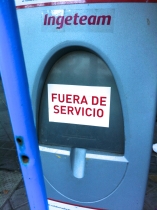 I only saw one public charging station, and it appeared to be permanently out of service.  The Tesla Supercharger map indicates that in Winter 2014, one can drive from Barcelona through Madrid to Lisbon.   A few years ago, I toured Spain and Portugal extensively.  There is a very nice high speed train between Barcelona and Madrid but we did drive between Lisbon and Madrid in a rental car.

On my trip, I did check to see if my Tesla was still in the garage using my app.  Unfortunately someone in my neighborhood had their house robbed during my trip.

I think the Model S will work well in some locations in Europe where driving is more of a necessity than in Madrid.  I was reminded again how much energy per person we use in the United States than in so many other parts of the world.

All photos and text are copyrighted by Tesla Owner. You can use any photos for personal or commercial use if you credit this blog and provide a link.